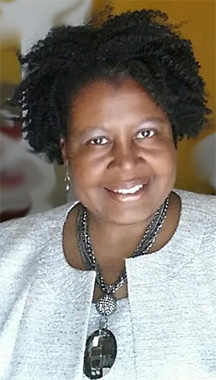 is a native of Birmingham, Alabama and a bona fide PK (preacher’s kid). She is youngest daughter of 4 of the late Rev. Columbus and Inez McMillan Jr. After graduating from Phillips High School, she continued her education and graduated from Miles College with honors.

He’s Preparing Me: As a child, Yolanda knew that she was different. She believed at the age of 8 that she had a calling on her life. It was a few years earlier where her mother had introduced her to Jehovah Rapha and through her mother’s teaching, Yolanda learned to pray to a God she did not fully know but believed. She believed He could take away the nightmares that tormented her as a child. Those nightmares proved to serve a significant purpose and caused her to develop a prayer life that could only be orchestrated by the hands of God.

After the death of Yolanda father in 1991, she joined First Baptist East Boyles under the late pastor of Rev. Clyde Beverly Sr. Yolanda remained a member until joining with Sixth Avenue Baptist Church in 2012. Yolanda preached her initial sermon at 2013 and was licensed under the leadership of Pastor Dr. John Cantelow at Six Avenue Baptist Church.

Speak Lord, Speak to me: After hearing God’s voice again, Yolanda got involved with Grace Mission which is an all-girls orphanage in Haiti and in January of 2016 accepted a seat on the board of Grace Mission. Yolanda is now President of the Board of Directors. Yolanda seeks out sponsors for each child and recently traveled to Haiti with 15 ladies which included 6 members of Tri-County Links where they hosted the 2nd All-girls Spiritual Retreat in Haiti.

Gently speaking, Jesus keep asking, who will go: One morning as Yolanda was preparing to spend time with God, she heard God’s voice again saying, “go and do what I told you to do last year”. Immediately she got up and went to the bus stop where Jackson Olin High School students gathered to catch the bus. Twice a week before they get on the bus, they form a large circle and pray. Twice a month she feeds the students breakfast and share a word of God.

Who Am I that you are mindful of me: In 2016 God has centralize Yolanda’s ministry around the common theme of “GO” (Matthew 28:20).  She is determine to be able to adequately answer the question that God could potentially ask, “What did you do with what I gave you?” Yolanda believes that the answer to what is happening in this dark world, sits in so many congregations Sunday after Sunday……..the believer (salt and light). Yolanda is dedicated to teaching fellow believers on what it means to move beyond these four walls

In 2020 Yolanda officially became the Minister of Foreign Mission at Sixth Avenue Baptist. Yolanda ensures the most effective ministry possible in alignment with the vision, core values and ministry practices of Sixth Avenue Baptist Church.  She is the primary liaison between the church and the community as it relates to international missions and serving.

Yolanda is an active leader in the Prayer, Teaching, and Leadership development ministries.