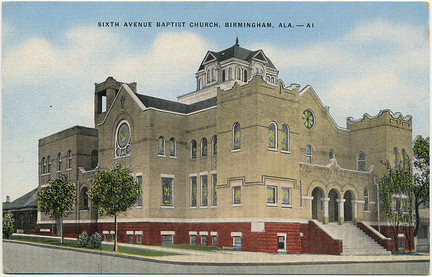 The history of the Sixth Avenue Baptist Church closely parallels the struggles of our ancestors in this country who were freed from slavery following the ending of the Civil War and the signing of the Emancipation Proclamation. In 1881, encouraged by Reverend M. Tyler, president of the Alabama State Convention, a small group of Christian men and women banded together to assemble the beginning of this historic Baptist church. The founding members of the congregation known as the House of Prayer were brothers M. G. Kendricks, Eli Parker, John Doaks, Yancy Kendricks, Henry McCoy, John Dudley, Eli Parker, Jr., T. W. Walker, and H. S. Howard, and sisters Sallie Kendricks, Fanny Jones, Jane Kendricks, Sarah Dudley and Fanny Phillips. This new congregation built a small building (18’x34′) on a corner lot (100’x190′) located on Sixth Avenue, South and Sixteenth Street. The first pastor called by the congregation was the Reverend Silas Jones of Mt. Meigs, Alabama.

After the resignation of Pastor Jones, the Reverend T. W. Walker, a founding member, was called as the second pastor. During his tenure, the church membership grew and a program of service was developed to include the total community of Birmingham. A choir was organized in 1886 and the edifice was enlarged to 30’x45′. On April 14, 1888, the cornerstone was laid with the Reverend J. W. Foster of Montgomery, Alabama preaching the dedicatory sermon.

In January, 1891 the Reverend J. White of Selma replaced Pastor Walker in the leadership of the church. During this period, the church was in a spiritual crisis and the task of leadership was extremely difficult. It was also during this time that it became necessary for the church to relinquish a parcel of property (80’x34′) which was being acquired adjacent to the church building. Pastor White became ill and was given a leave of absence. After the death of Pastor White, The Reverend J.Q.A. Wilhite was called as the fourth pastor of the church in May, 1895.

When Pastor Wilhite took over the pulpit in 1895, the church was in ill repair, without a baptismal pool or parsonage, and had indebtedness of $2000. Under his leadership, the church building was remodeled, the indebtedness retired, and additional property acquired. A parsonage was erected on the new property at cost of $2,300. The debt was soon retired. The congregation continued to grow and progress and turned its attention to the building of a new edifice. A building fund was started. Soon afterwards, in March 1907, the health of pastor Wilhite failed and he resigned the pulpit. During his illness, the Reverend P.E. Colson served as interim pastor, Reverend Wilhite died on June 8, 1908 bringing great sorrow to the church and community.

The Reverend John Washington Goodgame, Sr. of Anniston, Alabama was called as the fifth pastor of the church. He preached his first sermon as the new shepherd of the flock on the first Sunday of May, 1898. By the third year of his pastorate, the building fund had grown significantly and a building committee was appointed. This committee contracted with Windham Brothers construction company to erect a new building. The day following the awarding of he contract, the wooden structure caught fire and was completely destroyed. The Shiloh Baptist Church and other neighboring churches offered their facilities, but very shortly thereafter, a tent was erected by Brother W.M. Goodson, a contractor, and the membership continued to work toward the building of a new edifice.

upon this rock I will build my church. . .” Matthew 16:18. “Except God be with builder, the building will be in vain.” were the words uttered by Lucille Goodgame, daughter of Pastor Goodgame, as she shoveled the first dirt at the groundbreaking ceremony for the new church. Each member contributed one dollar toward the occasion. Construction was commenced and the cornerstone of the church was finally laid in 1910 by the Grand Lodge, Brother C. Fisher, Chairman. A Moeller pipe organ was later installed with Mrs. Jessie C. Reed serving as organist for twenty-nine years.

During World War II, many men went to war. Those who remained continued working to liquidate the church debt. On November 18, 1918, peace was declared and the church sponsored a grand reception for the returning heroes.

In 1919, the church debt was liquidated and little Miss Ines Williams, daughter of E.A. Williams, set fire to the mortgage while prayers were lifted. The congregation continued to work diligently toward the dream of expanding the church campus. Finally in 1927, the cornerstone of educational building was laid, and the building was later completed in 1928. Deacon T.R. Purdie was general superintendent of the Sunday School and was assisted by Mrs. Carrie B. McQueen.

After a full and glorious ministry of twenty-nine years, Pastor Goodgame, Sr. passed away. The Reverend F.J. Herron served well as acting pastor until the Reverend John Washington Goodgame, Jr. was called to succeed his father in March, 1938. Reverend Goodgame, Jr. preached his first sermon as the sixth pastor in May, 1938. 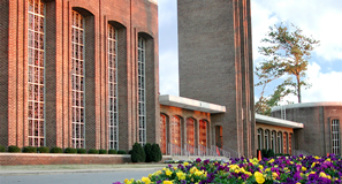 Under the pastorship of Reverend Goodgame, Jr., the music ministry of the church excelled and expanded from one choir to four. Brother James Glover, a fifty-year member, was a featured soloist for many years. The church became involved in radio ministry on Sunday mornings, and the gospel is still broadcast over the airwaves throughout the state.

Progress in the city of Birmingham began to affect the church as surrounding houses were torn down to make way for the expansion of the University of Alabama Medical Center. As a result, a new parsonage was acquired at 620 Center Way Southwest.

Pastor John W. Goodgame, Jr. served successfully for twenty-four years until he passed away on March 28, 1962. The Reverend Daniel Ollie then served as interim pastor until August, 1962 when a son of the church, the Reverend John Thomas Porter, was elected the seventh pastor of the church. Reverend Porter, at youthful thirty-one, was a Graduate of Alabama State University and Morehouse College, and returned to us after five years of pastorate in Detroit, Michigan. The church, and Pastor Porter were honored by having Dr. Martin Luther King, Jr., as preacher for the installation service.

In 1962, soon after the coming of Reverend Porter, the great civil rights revolution of the sixties bombarded the city. The cause of civil rights for our people was advanced with pastor and membership taking an active role. Pastor Porter was jailed three times during protests with the church family in constant prayer for his safe release. The statue at the north entrance of the Kelly Ingram Park (17th Street and Fifth Avenue, North) bears likeness to Reverends John T. Porter, A.D. King, and N.H, Smith, and offers an historic representation of the ministers as they kneeled and prayed at a major protest during the demonstrations of the era. Dr. Martin Luther King, Jr. spoke many times from the Sixth Avenue pulpit to mass rallies being held at the church. The funeral of three of the four little girls killed in the bombing of our sister church (Sixteenth Street Baptist) was held in the church sanctuary with the world community in attendance.

With continued changes and expansion of the surrounding medical complex, the future of the church edifice at the historical site became a concern. The congregation then moved to acquire twelve acres of land on Montevallo Road, Southwest. Having successfully purchased the land from the Salvation Army, the plans for a new building were drawn by Lawrence Whitten and Son, Architects. On May 26, 1968, with mixed emotions, the congregation worshipped in the old church for the last time. Construction on the new building began on January 3, 1969. During the construction of the new church, services were held at Ullman High School located on Twelfth Street and Seventh Avenue, South. At last, on March 3, 1970, the first service was held in the new facility.

Pastor Porter led an upbeat, progressive congregation to the end of the twentieth century, closing each church service with reminder to “keep looking up”. On December 31, 1999, he officially retired as Senior Pastor of the church, and on Sunday, May 14, 2000, after thirty-eight years of service, he delivered his last sermon. Reverend Porter continued to serve as interim pastor until July 9, 2000 when the Reverend Al B. Sutton, a young seminarian, accepted the call to become pastor.

On November 12, 2000, with his father, the Reverend Al B. Sutton, Sr., preaching the installation service, Reverend Sutton was installed as the eighth pastor of this historic family of believers. Reverend Sutton ignited a spirit-filled and positive ministry which escorted us into the next millennium. After 10 years of service Rev. Sutton’s tenure ended.