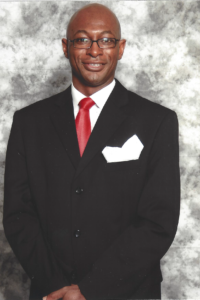 Robert received his public school education in Dawson, Ga. He attended Albany State University and Georgia Southwestern University where he graduated with a Bachelor of Science degree in Psychology with a minor in Chemistry. In 1994 he earned a Masters of Divinity degree, with a concentration in Christian Education, from The Interdenominational Theological Center in Atlanta, Georgia. In addition, he has an earned Doctor of Ministry degree from South University. He is also a graduate of the Southwest Georgia Regional Police academy, Army ROTC, Engineer Officer Basic Course, and the Army Chaplain School.

Reverend Spicer received his call to the ministry in 1990 as a member of Jordan Grove Missionary Baptist Church in Leesburg, Ga. He was licensed to preach in 1990 and Ordained in 1995. From June of 1994 to March of 2016, he served as pastor a pastor in the United Methodist Church of the Alabama-West Florida Conference. He has also served as the Director of the Tuskegee University Wesley Foundation. He is the founder and director of Southern Regional Christian Academy- a private high school.

At the local church level Reverend Spicer has been very intentional in nurturing and developing congregations. Some of the ministries that have been established in churches under his leadership include: Child Development Center, Bowen Economic Development, Inc., Southern Regional Christian Academy (a night high school), After School Programs and Summer Academies (elementary and junior high). Reverend Spicer attributes much of the work to intentional Bible study participation and active prayer ministries. He has been intentionally involved in church growth and new church development work for the past ten years.

Robert has been involved in several community organizations by serving on the board of directors for Habitat for humanity and Vice-President of the Tuskegee Interdenominational Minister’s Council, and Chaplain for the Tuskegee Police Department. He has served in several leadership positions as a member of Alpha Phi Alpha Fraternity Inc.

Robert uses as his personal motto: “Help somebody as we travel along life’s journey and our living won’t be in vain.”